A Sweet Bait is Hard to Resist: Tips for Trapping Raccoons

16
A Sweet Bait is Hard to Resist: Tips for Trapping Raccoons 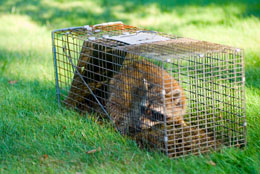 Raccoons are nocturnal animals that can wreak havoc in your backyard. This article provides some information about trapping raccoons.

Raccoons (Procyon lotor) are mammals with characteristic features, like dense fur and black mask around the eyes. They have gray fur, broad heads, black eyes, straight ears, and a pointed nose. Their front paws are extremely dexterous, and resemble human hands, as each foot has five long toes, with claws. The body of a raccoon is almost round, and can weigh between 8 to 20 pounds. Some individuals may have a body weight of up to 40 pounds. These animals are very agile and adapt to a wide range of habitats.

Even though, it cannot be said that raccoons are harmful creatures; sometimes, they may enter areas inhabited by humans, and cause much nuisance. They may attack your pets, topple the trash cans and poop in the pool. In such cases, you can use repellents to ward off these animals from your premises. However, trapping raccoons is found to be the most effective method.

How to Trap a Raccoon

Being nocturnal, raccoons come out after dark and hunt for food. In a human habitat, they can cause much nuisance, while searching for food. They may also occupy some parts of buildings, like chimneys and attics and set up their den. Here are some tips for trapping raccoons.

Legal Aspects: Before starting with the preparations, you have to check whether it is legal to trap raccoons, and what you are supposed to do after trapping the animal. Refer to the state laws regarding the subject. While in some parts, the relevant laws do not allow such trapping, it is legal in others.

The Right Trap: The next step is to buy a raccoon trap, preferably a live one. While buying a trap, make sure that it can accommodate a big raccoon with a body weight of 30 to 40 pounds. Try to avoid those fatal ones, which can cause harm to the trapped animal. Once you choose the right trap, try to understand its functioning. You must know how to set the trap and how to release it.

Right Location: The next step is to place the trap in a suitable location, preferably places where you have seen the animal. If the animal has a den in your place, keep the trap at the entrance of its den. As raccoons are mostly found near water sources, you may also keep the trap near the pool. Instead of going for a single trap, you can set up multiple traps in different locations.

Raccoon Trap Bait: Once you have set the trap or traps, the next important thing is the bait. Raccoons are omnivorous and feed on both plant and animal matter. You can bait the raccoon trap with anything; but it is better to avoid meat, so as to prevent your pet dogs and cats from entering the trap. Marshmallows are the best bait for raccoons. You may also use sweet corn, eggs, fish, sugar-coated vegetables, etc., as bait. Keep a major part of the bait in the farthest corner of the trap, and leave a trail of the bait along the usual path of the animal. This can lead the animal to the trap.

What To do With Trapped Raccoons: Raccoons are nocturnal, and so, it can get trapped during night. Once a raccoon is trapped, you have to be very cautious, while handling the trap. These animals can carry rabies, which may spread to humans. So wear gloves while handling the traps, and dispose the animal as per the state laws. You can either relocate them or kill them humanely (as per relevant laws).

While using a raccoon trap, don’t forget to go through the instructions of the manufacturer. Trapping raccoons is not a difficult task; but exercise caution, while handling the trapped animal. Humans have been trapping these animals for fur, for a very long time. However, refrain from such practices; and trap them, only if the animals are causing much nuisance.