Everything You Wanted to Know About the Australian Tree Frog

16
Everything You Wanted to Know About the Australian Tree Frog 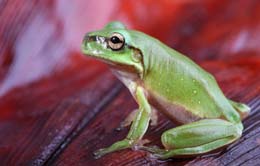 One of the most popular pets in the world, the Australian tree frog, is a fascinating amphibian. It usually, has a vivid shade of green and is known by many names like, Green, White, and Dumpy tree frog. The article presented below bares all about this species.

The Australian tree frog, or the ‘litoria caerulea’, is originally a native of Australia and New Guinea, though the pet trade has transported it far and wide. It has successfully adapted to New Zealand as well as United States. It is a fascinating creature that can survive both on land as well as in water. Let us find out more about its habitat, feeding habits, and conservation status.

Facts File
It is one of the largest members of its species and can reach up to 10cms in length. Their life spans are also longer than most of their cousins and can reach between 16 to 20 years in captivity. In the wild, their lives are smaller due to predation. They are docile and hence make good exotic house pets.

An amazing, less known fact about this frog is that its soft, green skin secretes compounds with antiviral and antibacterial properties. Their skin color ranges anything between light green and dark green, and can sometimes appear brownish or olive green. Their colors depend on the local temperature and the color of their surrounding environment, as it is supposed to give them an effective camouflage. Some have small, white spots on their skin.

They have large discs at the end of their toes. These allow them a firm grip, when they climb on vertical surfaces. Their webbed limbs allow them to cling to branches and trees and it is not uncommon to find them stuck on grass or leaves. They can be found in a wide range of eye colors; red, yellow, brown, green, silver, or gold.

Being amphibians, they have lungs, but they mostly absorb oxygen through their skin (only if the skin is moist). The main disadvantage of this constantly wet skin is that it is the prime breeding requirement of pathogens and this increases the risk of infections.The Australian tree frog however, is prepared for this eventuality, where it secretes peptides to destroy these pathogens.

It is a nocturnal amphibian. They come out only at night or the late evenings, to hunt, feed, and mate. During the day, they find dark, moist areas to sleep in. They are not seen at all during the winter.

Habitat
It can be found in the northern and eastern regions of Australia. They can be easily found in forests (near some water source) and can also survive in swamps and grasslands. They are also known to inhabit household water sources, like sinks and toilets. They can also easily survive in areas of high human populations. As they can tolerate human inhabitation in their natural habitats, they can survive longer, unlike the other threatened and endangered species that are losing populations due to loss of habitat.

Feeding Habits
As the Australian tree frog is not equipped with incisor teeth, it cannot tear apart its prey. It needs to feed on food, that can fit in its mouth. Hence, its diet consists of insects, such as spiders, cockroaches, flies, and crickets, and small animals, such as other frogs, bats, and sometimes even mice. For the smaller prey, they use their sticky tongues to shoot at the close range prey. For larger prey, they pounce on the prey and force it into their mouths with their hands. These predators also have some natural predators that feed on them. Their native predators are snakes, lizards, and some birds, while their non native predators are cats and dogs.

Conservation Status
Australian law protects the tree frog by giving it a protected status. The IUCN (International Union for Conservation of Nature) however, gives it a ‘least concern’ status. The broad range of habitats that it can survive in and its long life expectancy ensures that this frog will not lose population, unless some external factors come into play. They have good amount of food, good amount of land, a long life, and no over-hunting threat from predators. It doesn’t look like they need any attention just yet.

As a Pet
This creature is really a very popular pet, especially in those circles, that favor exotic pets. They are extremely docile and are the perfect dash of green in our usual ‘un-green’ (pun intended) homes. Their long life expectancy and the natural resistance to diseases, is a bonus. Their only problem as pets is their tendency to become obese. Over feeding and lack of exercise results in a fat problem for these frogs. Their weight gain problems have resulted in the name, ‘Dumpy tree frog’.
For all the animal lovers who don’t find frogs disgusting, this one is a gentle, docile, and beautiful pet. Personally, I think they are ‘soooo’ cute. If you like them, just as much as me, get one as a pet. Just remember to feed them in moderate amounts and let them loose for exercise, every once in a while. I bet you, they’ll croak for you, whenever you’re not around.