Exciting Laysan Albatross Facts That are Sure to Drive You Nuts 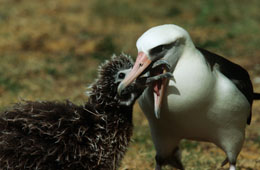 Spreading their wings over the oceans and flying like a king, this term can be used only for Albatross. There are about 21 species under Albatross family and all are the nomads of ocean. One of the most common species is Laysan Albatross which is mostly found in the North Pacific. Their name Laysan Albatross came from the Laysan island which is one of their main nesting site. They can live on both land and sea and are known for their huge wings and their unique lifespan. Laysan Albatross are marked by their dark brown back and white head, neck, and rump. So, let’s fly with these birds and find some interesting facts about them.

The facts which are associated with Laysan Albatross are interesting and they will leave you stunned with their amazing characteristics. So, check out the Laysan Albatross facts given in the following points.
Laysan Albatross is a big bird which is about 81 cm in length and 2.4-4.1 kg in weight. They have huge and large wingspan of 195-203 cm. Females have considerably smaller wingspan than males.
Though Laysan Albatross are considered to be big birds, but they are smaller than some of the other Albatross species.
They have dark brownish upper wings with white neck, head and rump and black smudge around the eye. Their beak has hooked tip and tail is small dark brown in color with white coverts.
They are mostly found in the North Pacific with around 16 nesting sites. They are spread across the islands of Japan and Mexico. Their main breeding site is in the Laysan and Midway which are Hawaiian islands. This is the fact which gave them their name.
They are nocturnal feeders, hence they usually hunt during the night. They feed on fish, flying fish eggs, crustaceans and squid. They can also feed on fish waste.
Laysan Albatross mate for life. They select their mate by complex courtship dances, and each year they meet on their nesting ground. They change their partners only when their previous partner dies.
They lay eggs in November – December and the incubation period is about 62 to 68 days. The female lays only one egg and if the egg broke down or may not remain fertile for some reason, then also the female will not lay any more eggs for that year.
Both male and female feed the chick. Chick can survive in the absence of its parents for a few days as its stomach has oil which contains nutrients and fatty acids which save it from starving.
They have a tremendous lifespan of 40 to 60 years.
One of the most interesting facts about them is that they can sleep while flying. Hence, they don’t require a land to rest in the night. This saves them from the predators like wales and sharks and helps them to survive for a long time.
Laysan Albatross have so much adapted themselves according to the ocean winds that they can fly for hours or even many days without flapping their wings. Satellite trackers reveal that they can fly like this for nearly 4 to 6 days. Some of them reportedly fly around the planet in around two months.
Their estimated population is 2.5 million which has decreased to a great extent. The major threat to these birds is marine pollution. They feed on whatever they see floating and this is the reason they accidentally swallow marine debris like plastic bottle caps, which tear their internal organs and take them to death. Other reasons for their death include: oil pollution, long-line fisheries, accident with the aircraft at the time of mating season, man-made structures, etc.
These were some of the facts about Laysan Albatross. You can also scroll over wandering albatross facts to get some more information. One more fact about these birds is that they are going towards the category of endangered species. So, it’s our responsibility to take step and give them clean and healthy environment. Save them, they also have the right to live their life.